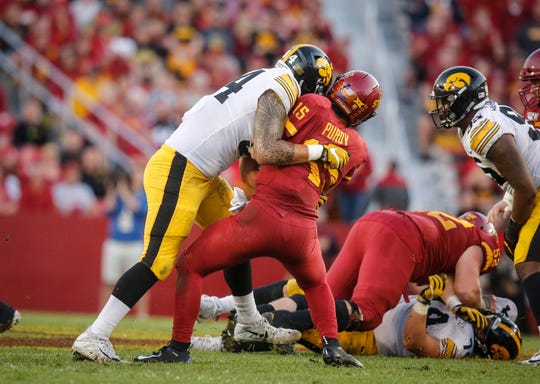 Iowa State sophomore quarterback Brock Purdy barely gets the ball away before getting pummeled by Iowa defensive end A.J. Epenesa in the third quarter on Saturday, Sept. 14, 2019, at Jack Trice Stadium in Ames. (Photo: Bryon Houlgrave, The Register)

• When Michigan has the ball: Michigan’s offense took a step in the right direction against Rutgers, putting together its most complete performance of the season. The Wolverines, though, have yet to prove themselves against a team as solid as Iowa. There are questions in the run game; Michigan is averaging under four yards per carry, while rarely utilizing the quarterback (as it did last fall with great success). The Wolverines aired it out against the Scarlet Knights, receiving a boost from the return of receiver Donovan Peoples-Jones, but even the pass game is relatively unproven. Michigan has to establish a run game against Iowa’s stout front and will have to keep quarterback Shea Patterson clean. Patterson, who has had an up-and-down start to the season, played much better against Rutgers, completing 74% of his passes and averaging 12 yards per attempt.

• When Iowa has the ball: The Hawkeyes are led by senior quarterback Nate Stanley, who has yet to throw an interception this season. Stanley, who already has eight passing touchdowns, averages 8.2 yards per attempt and has two big-play threats in Ihmir Smith-Marsette and Tyrone Tracy Jr. The duo have a combined 23 catches for 418 yards (18 yards per catch) and four touchdowns. The run game is solid and should receive a boost with the return of All-Big Ten tackle Alaric Jackson, who hasn’t played since spraining his knee in Iowa’s season opener. Jackson and tackle Tristan Wirfs project as difficult matchups for Michigan’s defensive ends. Led by running backs Mekhi Sargent, Toren Young and Tyler Goodson, the Hawkeyes are averaging 5.2 yards per carry and 217 total yards on the ground. This is a big test for U-M’s defense, which allowed 361 rushing yards at Wisconsin.

• A.J. is A-OK: A.J. Epenesa terrorized Big Ten offenses a year ago, racking up 16.5 tackles for loss and 10.5 sacks — as a backup. The former 5-star recruit has lived up to his top billing and is projected as a high draft pick this spring. He’s a handful coming off the edge and could present difficulties for Michigan’s offensive line. The Wolverines have had their share of struggles in pass protection this fall, and Patterson has lost three fumbles on sacks this season.

• Michigan presence: Iowa has several key contributors who hail from Detroit. Jackson, the All-Big Ten offensive tackle, was offered by Michigan late in the 2016 cycle but chose to sign with the Hawkeyes. Defensive linemen Chauncey Golston and Cedrick Lattimore attended East English Village Prep together and now start for Iowa. Other Michigan natives include Michael Ojemudia, a starting defensive back and younger brother of former Michigan lineman Mario Ojemudia, who played from 2012-15. Zach VanValkenburg, who transferred to Iowa from Hillsdale College, attended Zeeland West. Kaevon Merriweather went to Belleville, while Daraun McKinney went to River Rouge.

• Familiar face: Former Michigan receiver Oliver Martin will be on the opposing sideline Saturday, after transferring to Iowa this past summer and receiving immediate eligibility. Martin, who signed with Michigan’s 2017 class, has five catches for 28 yards. His former teammates believe it will be “weird” and “strange” to play against Martin, but there aren’t any hard feelings. “He felt like that’s what he needed to do to chase his goal,” U-M receiver Nico Collins said. “He made that decision. We still support him. Not mad that he left. Just hoping the best for him.” 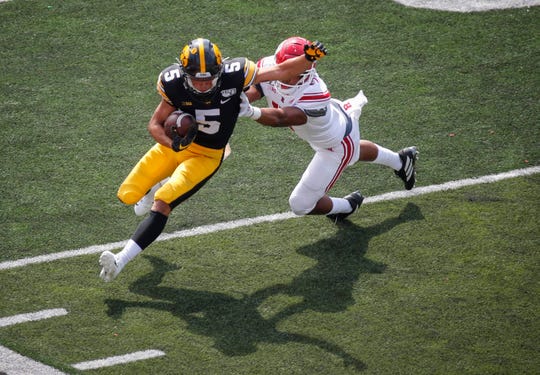 Iowa sophomore wide receiver Oliver Martin carries the ball after making a completion in the fourth quarter against Rutgers on Saturday, Sept. 7, 2019 at Kinnick Stadium in Iowa City. (Photo: Bryon Houlgrave, The Register)

• Make plays through the air: U-M will have to hit big plays through the air. That starts up front in pass protection. Michigan can’t afford to let Iowa’s defensive line generate consistent pressure. Michigan can also move Patterson out of the pocket; the Wolverines created some momentum on their opening drive against Rutgers likewise. U-M has four talented and productive receivers in Peoples-Jones, Collins, Ronnie Bell and Tarik Black; the Wolverines can create some favorable matchups in the passing game.

• Defensive line must step up: Iowa’s tackles are likely to be high draft picks. Can Michigan’s defensive ends, along with SAM linebacker Josh Uche, get past Jackson and Wirfs on the edge? If they can’t, that might not bode well for Michigan’s pass defense — Stanley is on track to put together the best season of his career. In the run game, the Wolverines — especially the interior linemen — have to plug gaps and take on blocks to allow the linebackers and defensive backs to make plays. This should be one of the most talented offensive lines Michigan’s defensive line will face all season; Jackson (No. 22) and Wirfs (No. 41) are both in the top-50 of CBSSports’ 2020 NFL Draft prospect rankings.

Iowa 24, Michigan 23: Iowa’s talent up front is on par with any team Michigan will play this season. Epenesa could be a one-man wrecking crew; Jackson and Wirfs, meanwhile, are a difficult matchup for U-M’s defensive line. Against a physical team like Iowa, the game is won in the trenches, and the Hawkeyes seem to have the advantage there.

Michigan football vs. Iowa: Scouting report, prediction – Detroit Free Press added by B. Sarah on October 3, 2019
View all posts by B. Sarah →